The Frailes Cordillera, one of the most surprising hikes in Bolivia

The Frailes Cordillera is located west of Sucre, the capital of Bolivia, a UNESCO World Heritage Site, and belongs to the Distrito 8 of the white city. The cordillera culminates at 5438m a.s.l, and is an extension of the Oriental Andean Cordillera. The name comes from an entertaining legend, according to which monks (Frailes in Spanish) would have taken refuge here to run away from the King of Spain during the colonization, after stealing some silver coins from him.

The first time we discovered this splendid Cordillera was in 2006. Since then we went back several times. In this beginning of 2019, we decided to go back once again refresh our memory and remind us why we love it so much !

The expedition starts early in the morning, we leave Sucre at 2810m a.s.l taking an asphalt road before joining a little path up to the small village of Chataquila at 3650m a.s.l. This path goes along an eucalyptus tree forest, planted in the 70’s, which gives to the place a real green atmosphere. From this point, starts the « Ruta Textil y Paleontologica » that we will follow all along the 2 days and you will quickly understand where the name comes from.

Our first stop will be at the Huayra Pata mirador at 3499m a.s.l. from where we appreciate a close sight of the Chataquila Cordillera, a ramification of the Frailes Cordillera and in the background we see the city of Sucre. Shortly after, we arrive at the village of Chataquila where the sanctuary of the Chataquila Virgin and a statue of Thomas Katari’s bust are located. The opportunity to follow a religious and historical class before starting the trek. 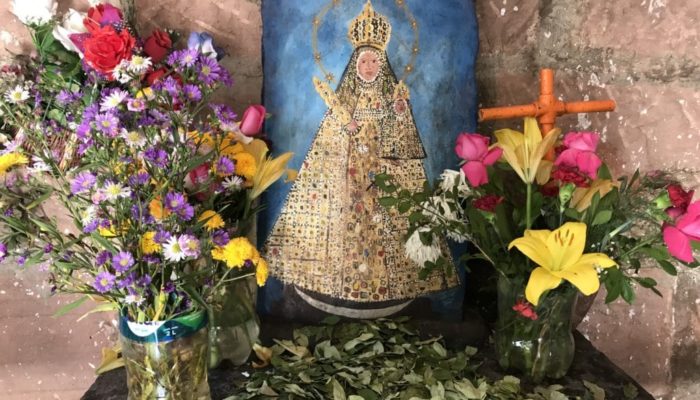 Chataquila comes from the Quechua language and means « oval moon ». For once, that Virgin wasn’t brought by the Spanish, she appeared out by miracle after the colonial period. It is celebrated the first week of august with dances and offerings according to the indigenous rituals. 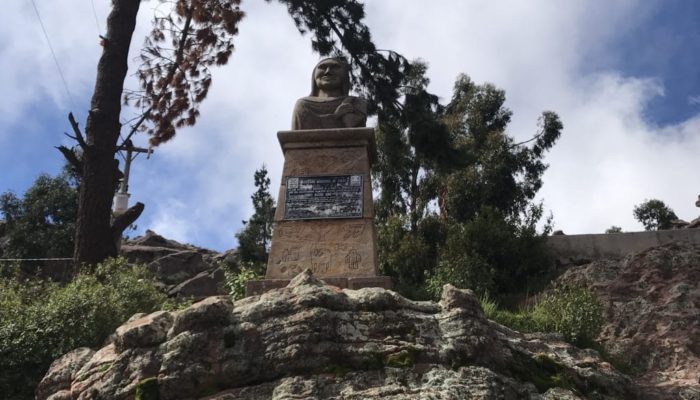 Thomas Katari is the man who initiated the rebellion – which then lead to a revolution – of natives against the spanish crown power, by refusing to go to the mine. 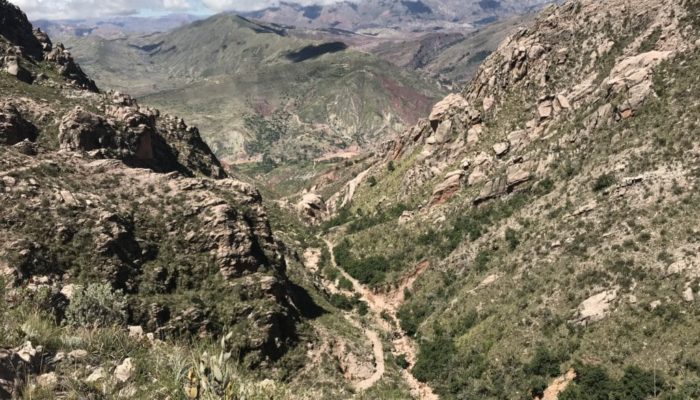 The trek starts by a great overall view which foretell some very nice views all along the walk. It is called the « camino del Inca » but it would be fairer to call it « camino pre-hispanic » because in fact it existed much before the Incas, but those last would have rehabilitated and improved the way. 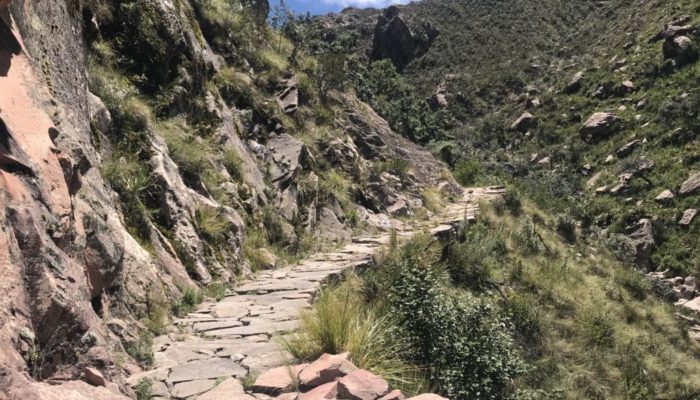 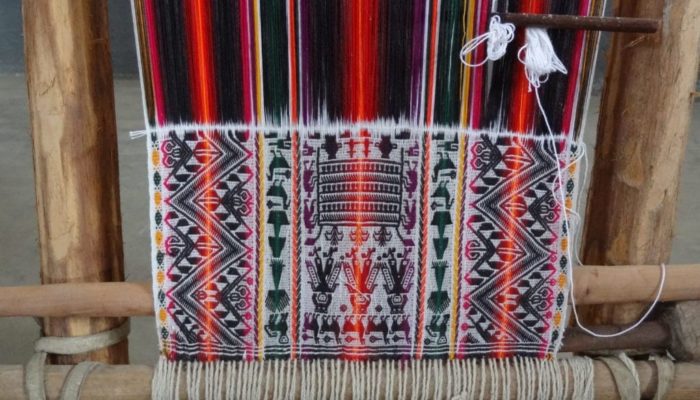 You’ll need 2h30, up to 3h if you want to take your time, to go down the way while speaking with the guide who will teach you a lot about the geological origin of the mountain’s formation and the community life in those small villages.

Then arrives the moment where we start to catch sight of the astonishing crater of Maragua … (which isn’t a volcano by the way …) in the background of all those mountains reliefs, on the left side. 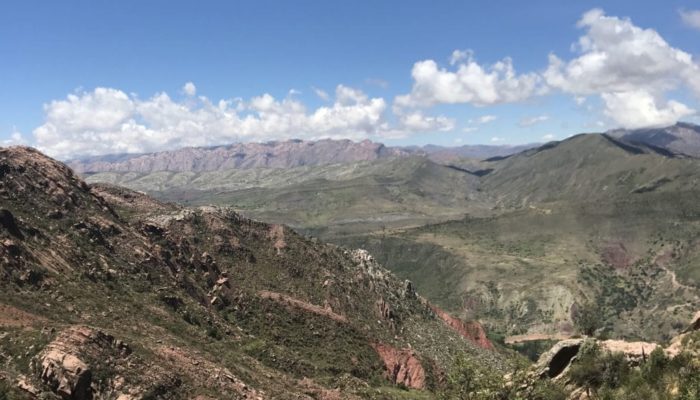 The end of the hiking leads us to Chaunaca where the car awaits us to bring us 16km away from the village of Maragua. We have lunch in the heart of the crater in the small and peaceful garden of the Eco-lodge. And then we leave for a nice walk of  2-3 hours, exploring the village surroundings. Other surprises await us ! 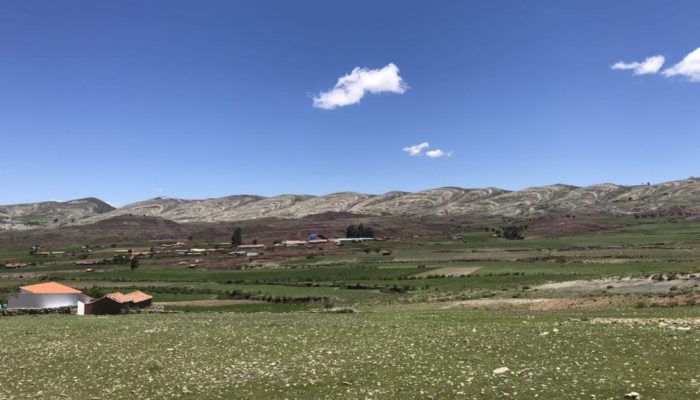 30 minutes away from the village, we find the Devil’s Throat, a waterfall that falls down into a canyon … For those who know the Toro Toro National Park, the landscapes will probably remind you the place. We get closer to the falls take some water drips on the body, and with some imagination, you will see the devil that gave his name to the place. 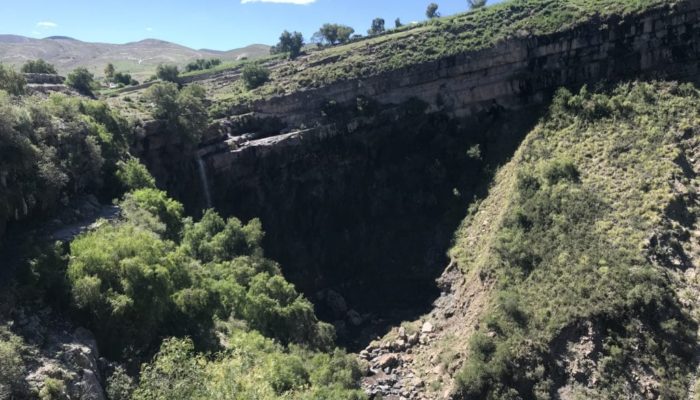 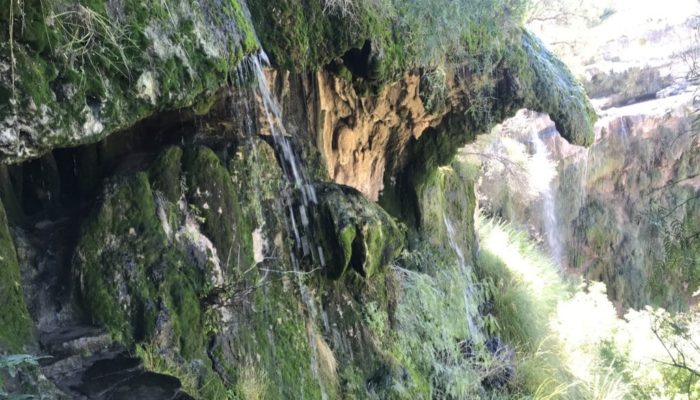 We bypass the whole canyon to finally drag ourselves to the top of the mountain, and have another perspective of the waterfall and an overall view on the Frailes Cordillera. Landscapes are sumptuous! Here you are free to follow the way you want and show the guide where you want to go. A unique freedom feeling! 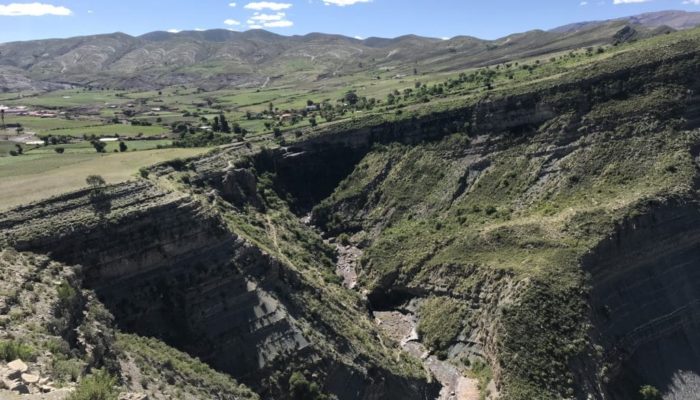 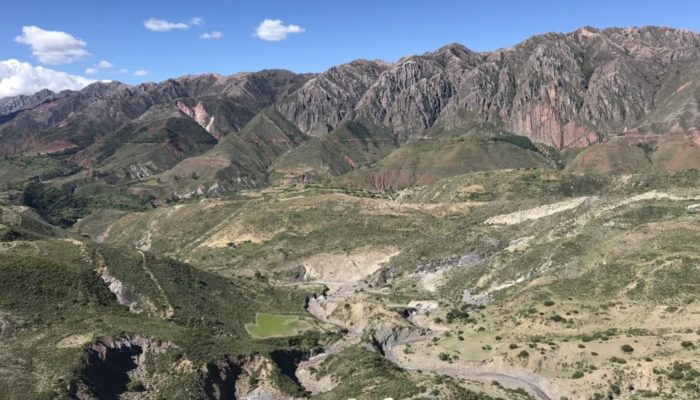 Then we decide to go down through farming fields, and we climb back up the opposite hill, in which is written in white rocks « welcome to Maragua ». This is where the village cemetery is located, overhanging the valley. Then we get back peacefully to the Eco-lodge with a beautiful end of day sunlight, have some rest, drink a maté, have a shower, and wait for the dinner time. 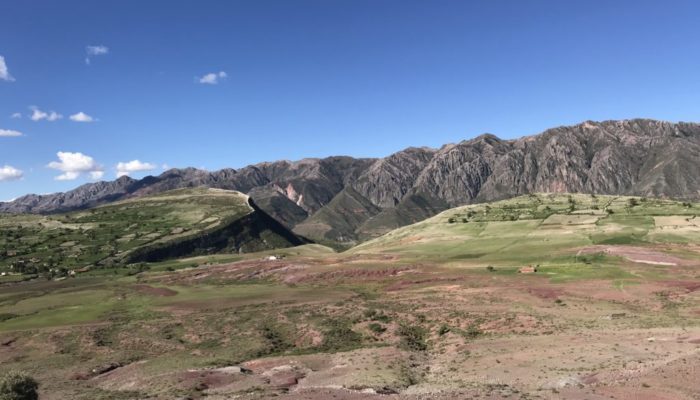 The next day, early departure in the morning by car following going the opposite side of the village. By moving away from the village, the view gets better, we cannot help turning back our head to enjoy the views, as we go along the curves. We leave the crater of Maragua, to arrive to a crossing where the car will drop us. Potosi is somewhere there behind the mountains. From there, starts a trek of approximately 3 hours. The opportunity to observe again the effects of mother nature, from erosion, to the sedimentary patch movements, the tinting of rocks by minerals, and many more natural phenomenon that will leave you in awe. Watch out where you step, you will probably walk on fossils without noticing it ! 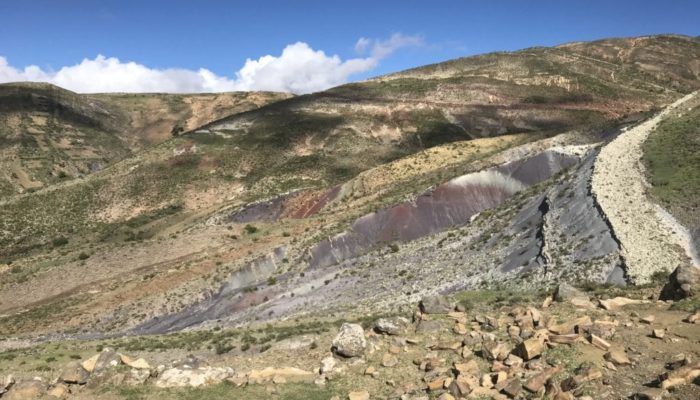 The path is most of the time undefined, we walk on big rocks, we cross water sources, until we arrive to a lifted wall, where you will catch sight of small holes in the wall, in reality they are not so small … as they are dinosaur footprints ! 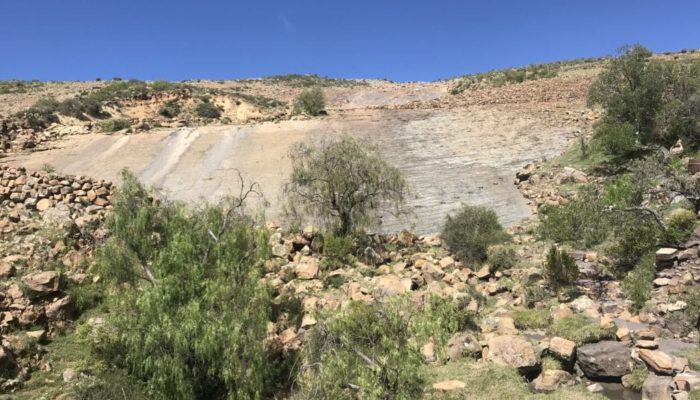 Yes you read it correctly, dinosaurs prints ! We are in the paleontological site of «Ninu Mayu» which is nothing else than the remains of the Cretacean era, 68 millions years ago.

Our guide explains to us, by analyzing the sizes and shapes of the footprints, that the site has witnessed the visit of 3 different families of dinosaurs : Teranosaurius, Titanosaurius and Ankilosaurius. A real journey in time and space ! You close your eyes and believe you’re in Jurassic Park. When you get closer the footprints are even more impressive ! 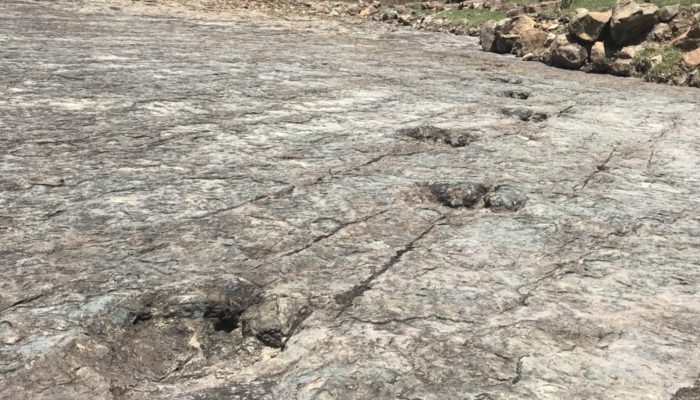 Then we keep up the walk, our head full of information, our eyes startled by so many discoveries, and we walk towards the village of Chullpas. 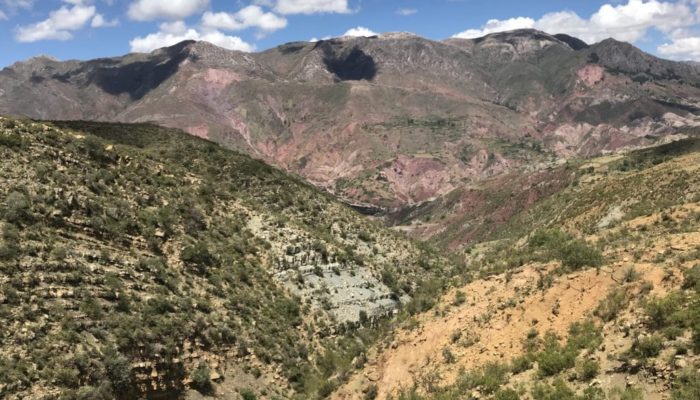 The car picks us up there, and goes along, obviously, again and again, very beautiful landscapes. We head to  Potolo, a little village at 45mn drive, that was created in the middle of the 80’s. No need to precise that once again it is impossible to be indifferent to the landscapes we observe through the window. 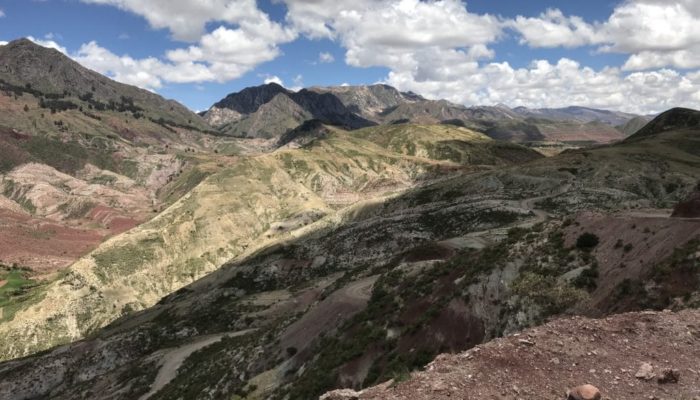 Once in Potolo, we have lunch and meet textile weavers to learn about with the Jalq’a culture. Women will even invite you to visit their homes, where you will discover their personal workshop. It is possible to buy some souvenirs as well. Then we go back to the road towards Sucre, and 2 last surprises await us : the visit of the Potolo Canyon. 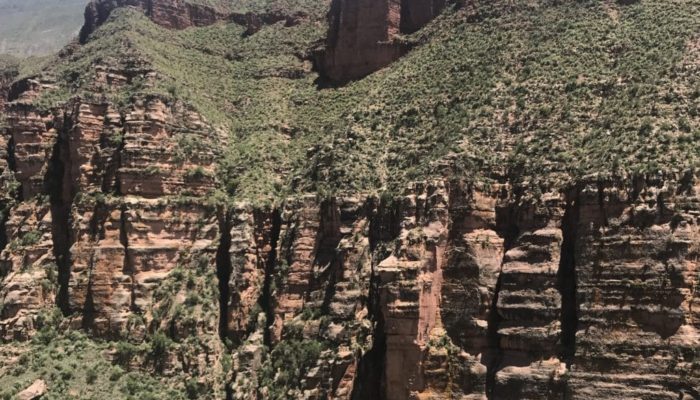 And one last mirador, Tazon at 3470m a.s.l, which overlooks the valley, for a last memorable picture ! 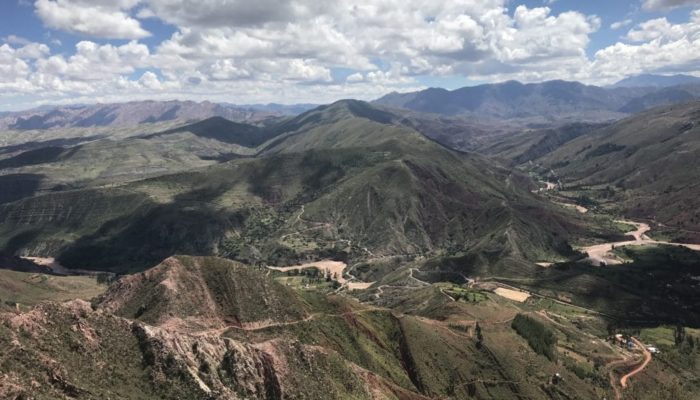 Return to Sucre at the end of the day, or drop-off at the airport, if you have to catch a flight to go visit some more Bolivian wonders. 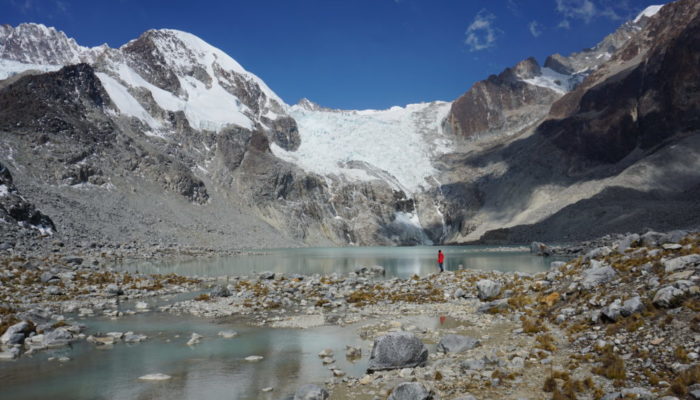 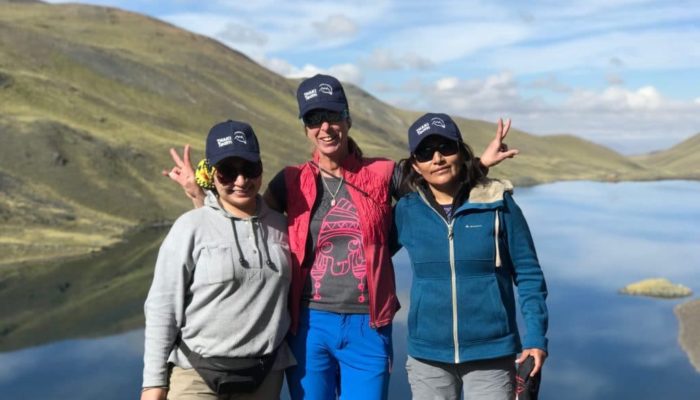 The most “ROYAL” Andean Mountains are in Bolivia 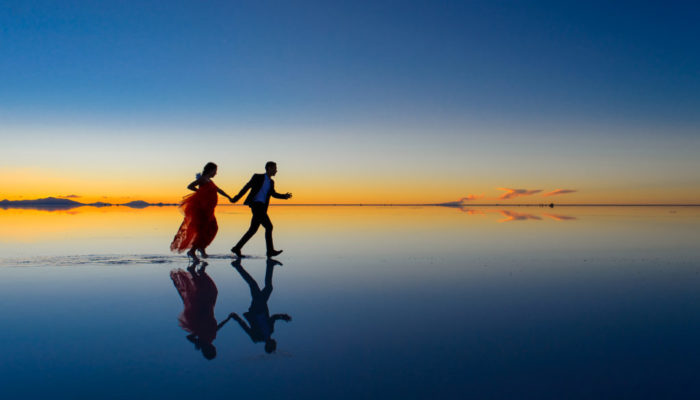 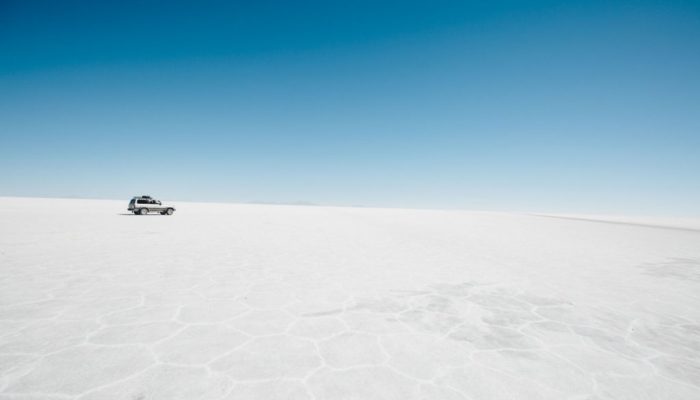 Where to visit in Bolivia? Our 10 essentials