North of the Cordillera Real, lies the Cordillera Apolobamba, northeast of Lake Titicaca, it is part of the Eastern Cordillera that extends along a northwest / southeast axis and the Cordillera further south. Difficult access, is accessed by a bad dirt track in ten hours from La Paz. You also enter the fascinating world of Kallawayas, Andean community who practices traditional medicine. These are itinerant doctors who gave the name to this population, Kallawaya meaning in Quechua “the one who carries plants on his back“.

Until today, this mountain was covered by trekkers on its eastern side. The trek was far from glaciers and mostly in the mists from the tropical part.

Thaki offers a new alternative along this beautiful and wild Apolobamba Cordillera by its western side, keeping as close to the glaciers.

Indeed, the Thaki Team had gone to explore the hidden treasures of this beautiful Cordillera during an expedition conducted in May 2013. The essence of this project was to share our passion between friends keen of mountain, Bolivian guides and members of the Thaki team. The entire expedition was scheduled over 12 days. The idea was to open a new route from the south to the north by the altiplano slope, keeping as close to the glaciers. It was expected to climb 5 peaks between 5,700 and 6,000 m. A film was made subsequently highlighting those Bolivian men living their passion in a country where the mountains are sacred places.

With this expedition, we offer today to discover this unique trek in Cordillera Apolobamba.

Having spent the past pretty stone houses in the first valley and its welcoming people, you will go on a wild trek and engaged at will, sometimes out of trails. You will sway between the high desert plateaus and valleys often collected at the foot of majestic glaciers and home to many different blue lagoons. The snow-capped mountains as Akamani (5.700m), the Ullakaya (5.810m), the Anta Kajwa (5.925m) or the Huanacuni (5.795m), punctuate your days all along the trip. These unfrequented paths allow you to watch the llamas and alpacas, but also other animals like wild vicuna or the “venados” Andean deer species.

Your path will then end in a beautiful valley which ends its run at the foot of a huge ice mass, forming an impenetrable barrier of snowy peaks. A walk along a pretty stream, winding between the rocks and two beautiful lagoons of green glacier will take you to your final step of this adventure, glacier Chaupi Orco, which rises to 6.044m. 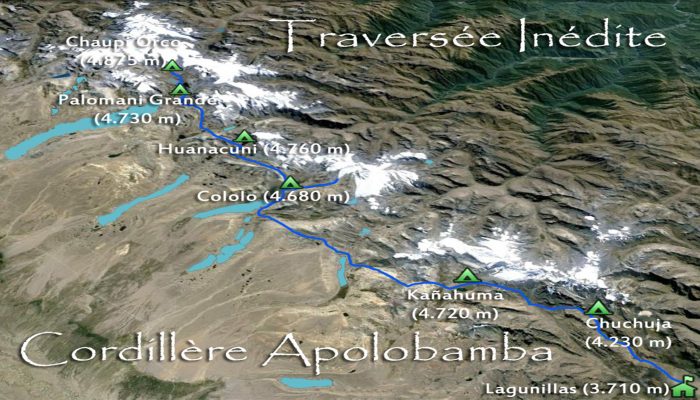 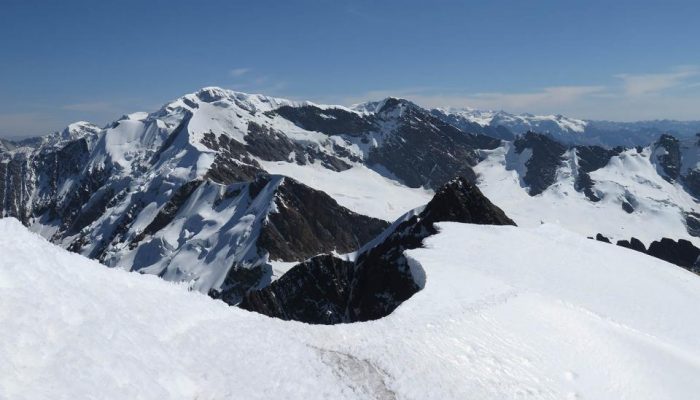 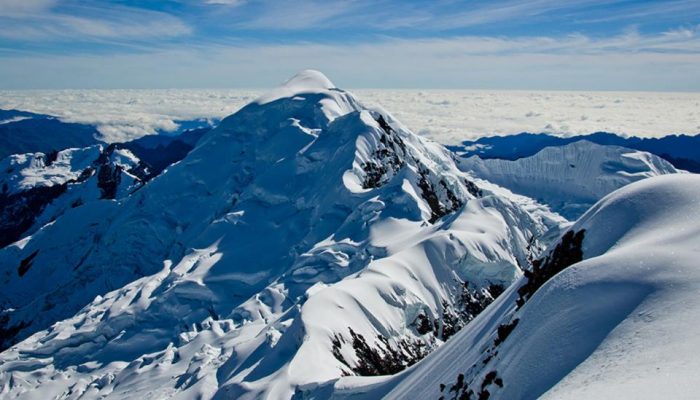